BTS Heardle App, How to Play Guess the Song for ARMY

bts heardle app link bts hurdle app download bts heardle app download bts apps they use does bts have an app which app do bts use which app bts use
BTS ARMY fans made a game called BTS Heardle. This game went viral on social media and became a hot topic, especially among fans of this South Korean boy band. BTS Heardle asked players to guess the song with seven chances. The inspiration for the BTS Heardle app game came from the Wordle game.
The Wordle game is a once-a-day word game that asks players to guess today's word in six attempts. Similarly, Heardle is all about guessing the song in seven attempts. According to Indian Express, this game was created by fans who manage the fan account @BTSCartData, an account that collects data about BTS.
Unlike BTS Wordle's first game, which was also created by them, this new game offers hints for each guess.

How to Play BTS Heardle

To play this game, all you have to do is open the bts-heardle.app link and follow the instructions listed on the page. 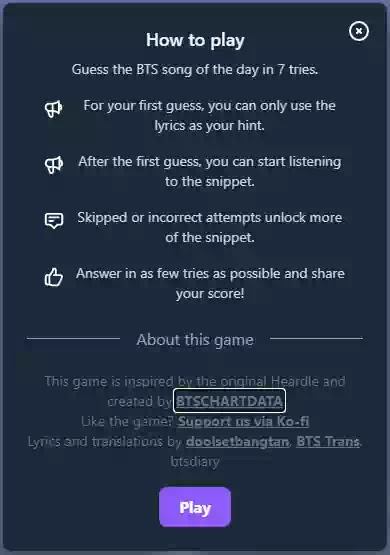 BTS Heardle will test fans' knowledge about BTS songs and lyrics. The original Korean lyrics and English translation will appear. Although most of BTS' songs are in Korean, the language will not hinder the bond between fans and BTS, thanks to the fan volunteers who have translated the group's lyrics from the start. For clues to the lyrics used in the new game, @BTSCartData collaborates with an account that often provides translations, namely @DoolSetBangtan. “After the first guess, you can start listening to the trailer,” says the rule on a free website created for the ARMY BTS fandom.
“Skipped or incorrect attempts unlock more trailers,” reads the rules when playing more songs on the same day. Once the player is successful, the correct song plays along with displaying the Spotify link of the song along with sharing options, allowing fans to showcase their success online.
This Korean band consisting of RM, Jin, Suga, J-hope, Jimin, V and Jungkook is arguably the biggest boy band in the world, its popularity soaring every day. Their fandom dominates social media platforms, especially Twitter every day. Now, the fandom can't stop admiring this new game, especially those who succeeded in their first try, “BTS Heardle” has dominated the trend worldwide. Most of the fans couldn't stop sharing their joy of guessing the song at once, proving true fan status. Many fans also like the message or lyrics displayed by the website. The lyrics refer to a lot of fun trivia about BTS.