How Many Piercings Does BTS Have?

All kinds of things related to the members are getting more highlighted because of their stunning visuals! So, how many piercings does BTS have?

How Many Piercings Does BTS Have? - This boy band from South Korea is BTS or Bangtan Sonyeondan, whose name is increasingly soaring because of its success in the eyes of the world. BTS also broke The Beatless's record on Billboard's Hot 100 chart within one week with the single "Dynamite."

All kinds of things related to the members are getting more and more highlighted because of their stunning visuals and achievements. More interesting for ARMYs to examine is the use of accessories among members. BTS members often wear earrings during their gigs and daily, showing their eccentric side. 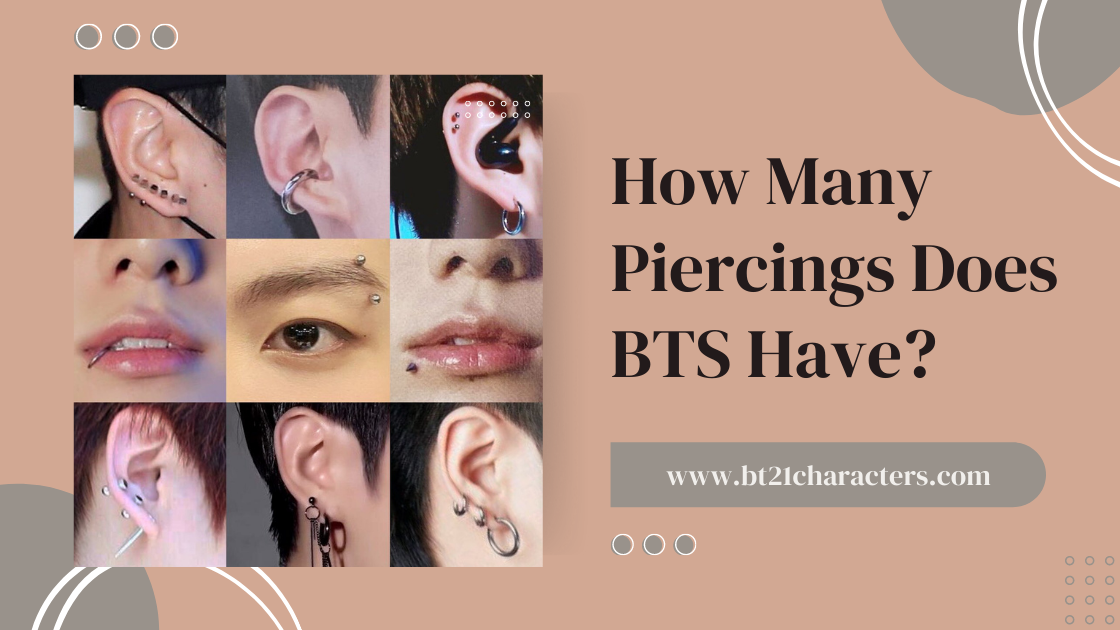 Let's see how many piercings and the layout of the piercings of BTS members are below!

If you've seen J-Hope wearing earrings, he's only wearing thongs, so his ears aren't lonely, he said. LOL. Then J-hope doesn't use piercings because his father is a teacher. He is also a boy in his family (usually, boys are the example). However, J-hope also promised Army that he would not use ear piercings even if he wanted to.

Anyway, everything related to BTS members often reaps admiration for ARMY. There is an interesting story from one of the BTS members, namely JIMIN. Once in a broadcast program via the V Live application, one ARMY asked Jimin,  "Are the earrings comfortable to wear?"

Jimin didn't just answer but even told the history of how he got earrings in his ears. Here's Jimin's story about his piercing: 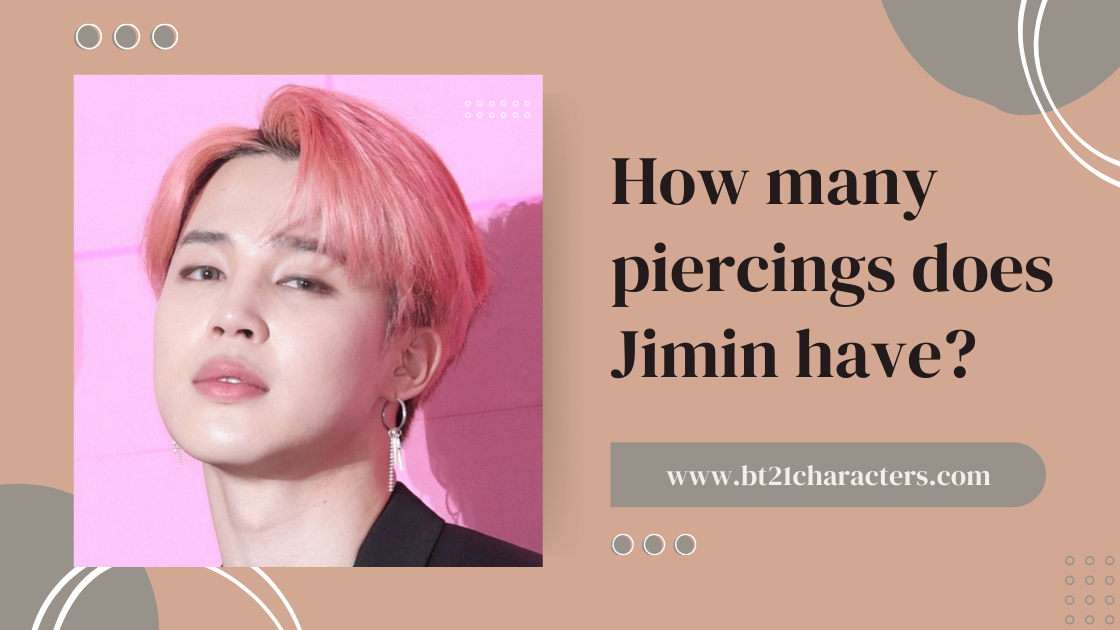 So one day, Jimin took the subway to Seoul to undergo his trainee period at Big Hit Entertainment. He made an appointment with V and their other friends on the weekend. But it turned out that what was planned did not happen.

Jimin and the friend who made an appointment came on time. Unfortunately, V is not even visible. Investigate a calibration. V apparently fell asleep. Even though Jimin waited for V to go for about 2 to three hours. While waiting for about an hour and a half, Jimin saw a piercer nearby. Because there was nothing to do, Jimin decided to get his ears pierced.

Since then, Jimin has become fond of getting his ears pierced. Unfortunately, he only had three because it took so long for his ears to heal after being shot. If possible, Jimin would like to have another piercing in the upper ear.

How many piercings does Jungkook have? 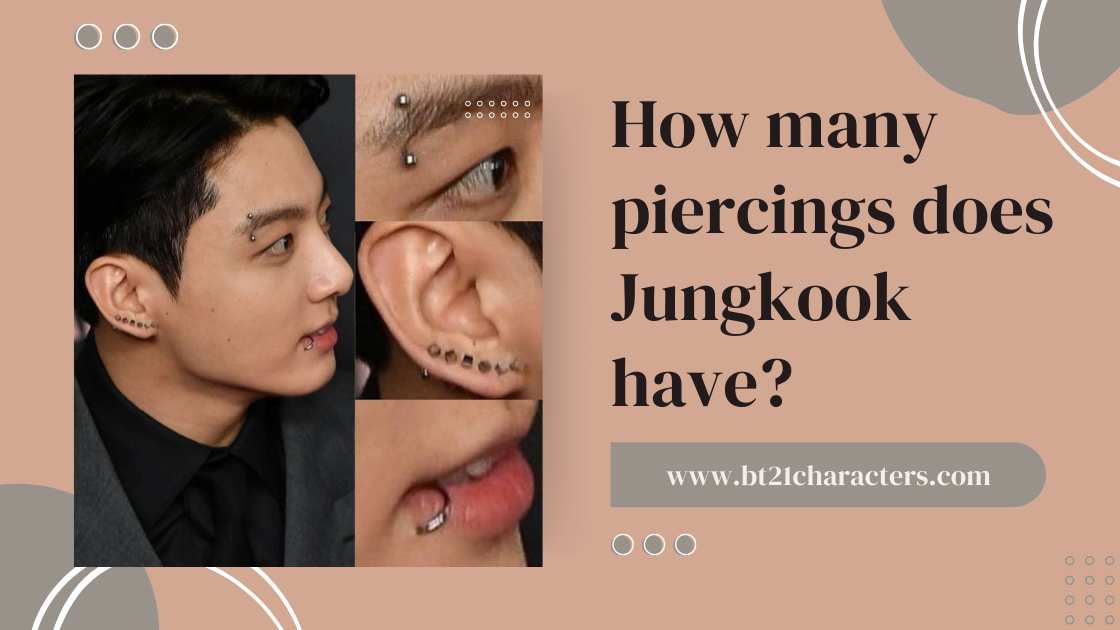 Some are unexpected, counting the number of piercings on Jungkook BTS's body. BTS Jungkook may be the make, but he's definitely not a kid anymore. He modified his body with tattoos to piercing or piercing in recent years. To date, there are more than 10 tattoos that he often flaunts. Just like his tattoos, Jungkook's piercing collection also continues to grow.

How many piercings does Jungkook have? They are scattered in several parts of the body. The following is the number of piercings and Jungkook BTS locations.

In early October 2021, ARMY first discovered Jungkook had his lips pierced. With his recent appearances, such as the PERMISSION TO DANCE ON STAGE online concert on October 24, 2021, Jungkook has appeared with a very real lip piercing! Some of her photos with her latest lip piercing are at The 2021 Fact Music Awards (TMA).

ARMY also saw more of Jungkook's ear piercing at the same event. Chances are he got it around the same time as the lip piercing. He now has at least four or six piercings in his right ear. In addition, his left ear has three piercings at the bottom. So so far, ARMY found that there are about 11 piercings that Jungkook BTS has.

Apparently, there are still some piercings that have not been confirmed. Some ARMYs think maybe Jungkook has more piercings. One of them is a tongue piercing. Some people thought they saw a silver ball on his tongue during one of his live broadcasts. However, some other ARMY insisted it was just drooling. The latest debate is the location of Jungkook's other piercing, which is on the nipple.

Jungkook BTS often wears many see-through clothes, and sometimes it looks like something is there. ARMY began to suspect it might be a piercing. However, it could be a clip-on microphone. Once again, the piercing in both parts of Jungkook's body has not been confirmed. ARMYs are happy to see Jungkook continues to express himself and break stereotypes.