What Songs Did BTS Perform at Muster 2021?

What songs did BTS perform at Muster 2021? Because the songs that BTS members brought sounded very beautiful and made the event lively.

What songs did BTS perform at Muster 2021? - The celebration of the 8th anniversary of BTS's debut through the Muster Sowoozo online concert in 2021 received a lot of enthusiasm from fans known as ARMY. This second event is the BTS 2021 Muster Sowoozoo concert, with the theme World Tour Version.

Read also: What is BTS Muster? This is the Explaination 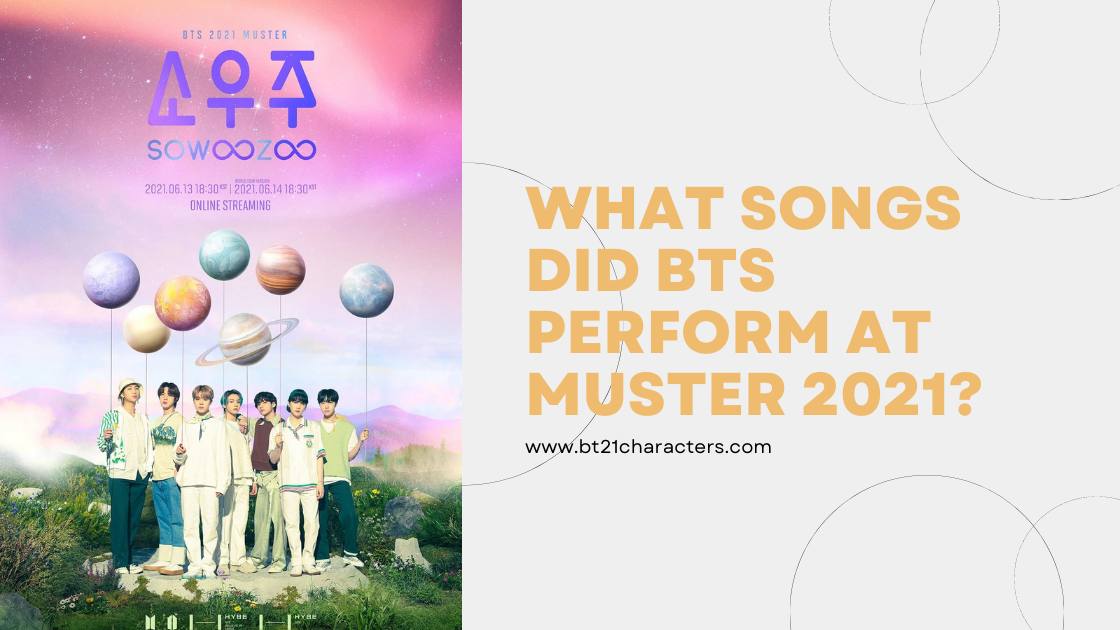 In the World Tour Version, BTS members performed their foreign-language songs. This was shared by one of the ARMYs through his tweet on Twitter. One of the ARMYs shared a list of songs sung by his beloved members. From ARMY's tweet with the Twitter account name @choi_bts2, the following is a list of what songs did BTS perform at Muster 2021.

Previously, for those who don't know, Blue Side was released on March 13, 2021, on the BANGTANTV YouTube channel.

Jimin's Promise song has been released through the Soundcloud music platform. In celebration of his 8th debut anniversary, Jimin performed his song Promise.

Three years ago, or October 23, 2018, to be precise, this song was released. Brought by RM at his birthday concert this year.

Everything goes in a collaboration between RM and NELL.

The unofficial song from Jungkook has been busy on social media lately.

This song Abyss has been released in conjunction with his 29th birthday.

Suga performed his song called People, which People's song was released in 2020 and was packaged in his D-2 mixtape.

He also sang this Suga solo song to celebrate the eighth anniversary of BTS's debut.

V's song Winter Bear was released on August 9, 2019. He sings Winter Bear to celebrate the anniversary of BTS's debut in the world tour version on this second day.

Read also: Where to Watch BTS Muster 2021 for Free

From "Daechwita" to Jungkook's Tattoos, These Are the Interesting Moments of "BTS 2021 Muster Sowoozoo" Day One 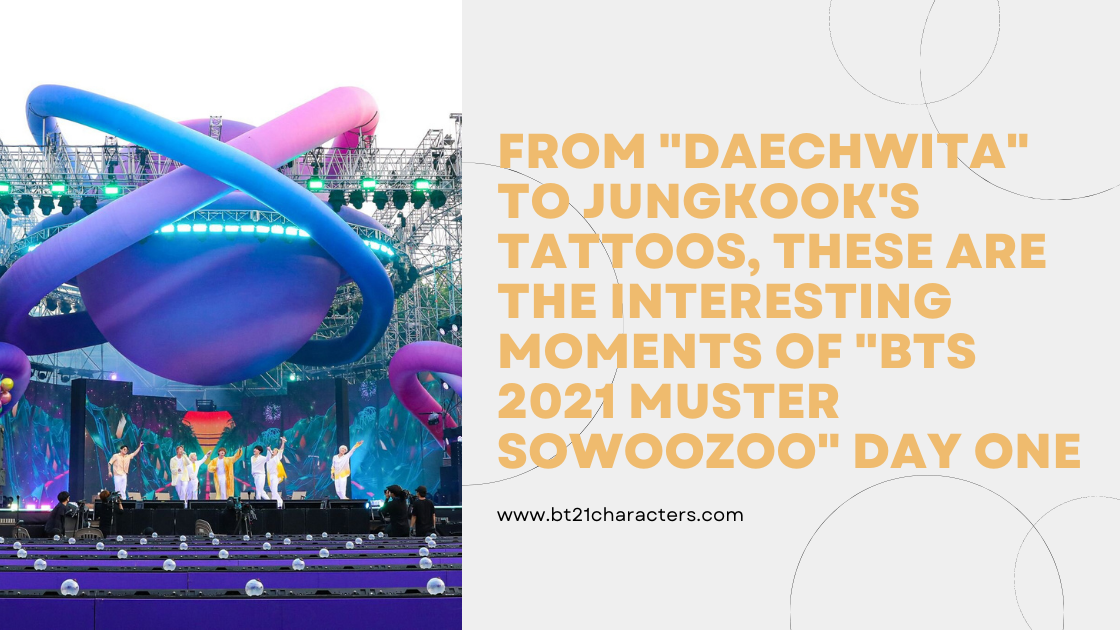 RM, Jin, Suga, J-Hope, Jimin, V, and Jungkook gathered together, gave the best performance with their hit songs, and brought memories of their concert before the Covid-19 pandemic. Various entertaining performances and funny moments were presented directly from the event planned for two consecutive days.

On the first day of "Muster Sowoozoo," BTS performed a live performance of several of their latest releases, such as Life Goes On, Butter, Dynamite, Moving On, Stay, Fly to My Room, Daechwita, IDOL, Dis-ease, Fire, So What, Not Today, Wishing on a Star. Several additional songs, You Never Walk Alone and Mikrokosmos. Almost all of BTS's performances on the first day received praise from their fans, the ARMY. Here are some exciting moments recorded in "BTS 2021 Muster Sowoozoo" on the first day.

The fans were taken aback by Jimin's appearance at the event. He was seen showing off his pierced lips. The seven members seem to want to give a fresh appearance for this online concert. They even dyed their hair again for this look.

RM also successfully made fans scream for showing off his tight biceps. In one of the performances, RM was seen wearing a sleeveless t-shirt so that his arm muscles were clearly visible.

The performance of Daechwita's song by the seven members

BTS members seem to really want to spoil fans in this event. They surprised fans by performing Daechwita's song together. This song was actually sung by Suga's alter ego known as August D.

For this event, they mainly played the song in seven versions. Even for the performance of this song, the seven members changed their appearance to be unconventional, like the actors in an opera. The members wear traditional Korean clothes, complete with hair, mustaches, and fake beards. Suga appeared with a sword that made fans reminisce about his appearance in the music video. At the same time, J-hope succeeded in impressing fans with his performance in the rap section.

Jungkook shows the tattoo on his hand.

The youngest member of BTS, Jungkook, surprised fans by stepping onto the stage wearing a short-sleeved shirt and performing several songs.

With his clothes, some of the tattoos on Jungkook's hands can be clearly seen by his fans. The furor, of course, immediately ensued. So far, Jungkook rarely shows tattoos on his hands. He always covers the tattoo by wearing a long-sleeved shirt.