HYBE Labels has further expanded its coverage globally this year by opening a BTS pop-up store in Toronto. So, are you looking forward to visiting?

Until now, the BTS fever has no end. The South Korean idol group has captivated fans worldwide, including in Canada. BTS fans, especially in Toronto, can't wait to look forward to the BTS concert this year. And interestingly, HYBE Labels has further expanded its coverage globally this year by opening a BTS pop-up store in Toronto. This is the first BTS pop-up store in Canada.

A department store in Canada that focuses on Korean and Japanese beauty and lifestyle shared this information through its official Instagram account (@sukoshimart). They said the BTS pop-up in Toronto would open in late summer without saying the exact time. Of course, this makes BTS fans in Canada, especially in Toronto, enthusiastic. 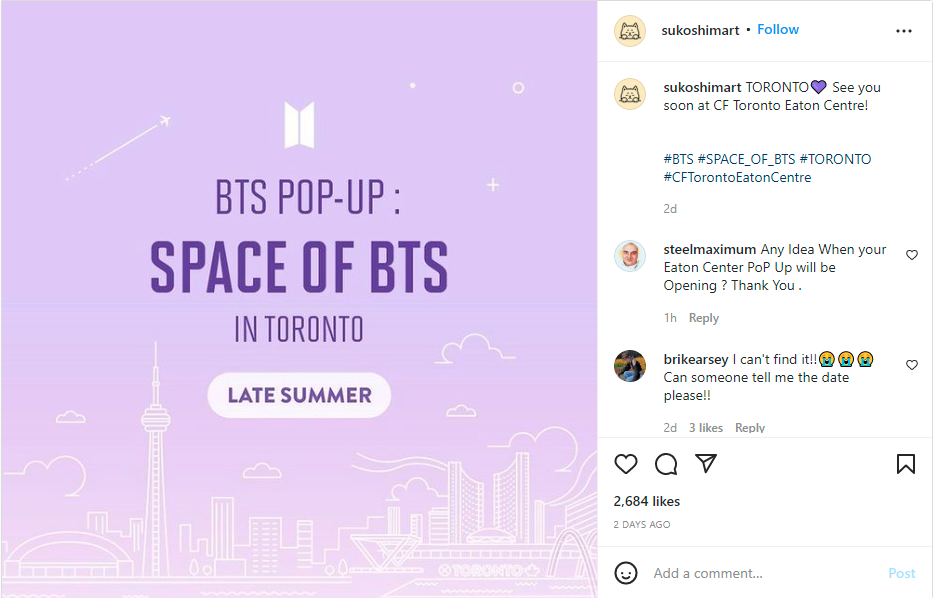 For those of you who are wondering what exactly is BTS' pop-up itself? This is a series of pop-up stores presenting several official BTS group merchandise. Not only that, here, BTS fans, aka ARMY, can also feel the euphoria of BTS by taking pictures in installations inspired by BTS songs. Yay!

In Toronto, the BTS Pop-Up Store will be built with the concept of the songs "Permission to Dance" and "Butter" and sell hundreds of merchandise ranging from apparel to various cute accessories. There are also accessories for gadgets such as pouches for laptops and AirPods cases to accessory products for home living such as towels, pillows, blankets, etc.

Although fans can buy whatever they want, it doesn't rule out the possibility that the stock will run out quickly. Since stock availability is minimal, the enthusiasm of BTS fans in Toronto is tremendous. In addition, not everyone can visit this special place. Only those who are really ARMY and want to book a place in advance through the website that has been provided (until this news was made, the website was not yet available).

In addition, some other terms and conditions need to be adhered to when visiting there, such as not disturbing the comfort of other visitors when taking pictures, no refunds for tickets that have been purchased, ensuring that your account and name match the tickets ordered and must comply with health protocols to be safe and comfortable in visiting the BTS Pop-Up Store. This is done to provide a more comfortable buying experience for local consumers.

We think BTS Pop-up in Toronto will have the same fate as in Los Angeles and New York, where there are many beautiful spaces in pop-up shops that ARMYs can capture while visiting. For those who come alone, you don't need to worry if you want to take pictures at the exciting spots provided. Because the staff on duty will help take photos with the best angel.

In Singapore, the offline showcase, BTS Pop-Up Showcase in Singapore, is also operated like Seoul. New items are released every week at the Singapore showcase.

That's a glimpse of a row of facts about pop-up stores in Toronto that launched in late summer. This event started in Seoul, South Korea, and continued to several other countries such as Japan, Singapore, Thailand, Philippines, Malaysia, Taiwan, Mongolia, and Indonesia. HYBE Labels representatives said they want to honor the ARMY in Kanda who always support BTS and provide unforgettable experiences. So, are you looking forward to visiting? Don't worry, you still have enough time to come here!